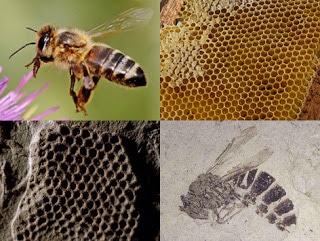 A question like “what came first, the honey bee or the honeycomb?” is usually reserved for the chicken and the egg.  The jury is still out on the timing of when the popular breakfast ovum emerged in comparison to its popular dinner meat counterpart, a.k.a. poultry.  How could an egg exist without there first being a hen to lay it?  How could a hen exist without it first hatching from an egg?  Argh!  This blog entry has nothing to do with pasta, but the round about thought pattern of egg-chicken, chicken-egg is a sure-fire way to cook a noodle.

What empirical data do we have in regard to honey bees and honeycomb?  Well, like the egg, honeycomb is the place where young bees develop and then hatch out of.  Also like the egg and how the yolk nourishes the young chick, honey is what most bee larvae eat.  Why did I say “most?”  Some larvae that are destined for the “throne” are fed royal jelly so they develop into a queen bee, but for the majority of honey bees, honey is their main staple.

Unlike the egg and how it comes with a yolk and egg white already inside, honeycomb doesn’t come with the honey inside.  Bees work very hard at collecting nectar from flowers which in turn is made into honey that bees store in honeycomb cells for future consumption.  Yes, honey bees spit back up the nectar.  As a bee drinks nectar from a flowering plant, the nectar goes to a nectar sack.  This reservoir is also called a honey-stomach and when it is

full, the worker bee flies back to the hive to offload the key ingredient in honey production.  The nectar is passed from bee to bee not only warms the nectar, but also dehydrates the nectar as the water content absorbs into each passing bee.  Once the water content is low enough, the last bee pours the “almost honey” liquid into a honeycomb cell to cure a little more.  Once the cell is full, the liquid has lost enough water, and is identified as honey; worker bees cap the cell with more wax to keep the new honey clean and fresh.

It is anyone’s guess as to the actual mathematical prowess of a honey bee, with that said, the hexagonal shape of  an individual honeycomb cell is the most efficient way to utilize costly bee’s wax.  The cylindrical hexagons of a honeycomb offer the most efficient ratio of storage area to bee’s wax than any other shape/structure.  One pound of beeswax can store approximately 22 pounds of honey.  There is no better way to store honey and keep the cost of wax under control other than using the honeycomb hexagonal shape.  Yes, wax is expensive.  According to data collected by the York County Bee Keepers Association, to produce one pound of honey, approximately 10,000 bees visit roughly two million flowers, and fly almost 50,000 miles.  In order for a bee’s wax glands to biochemically convert honey into beeswax, they must consume approximately seven pounds of honey to produce one pound of wax.  An additional third pound of honey is consumed in order to produce enough wax to store one pound of honey.

Why such an interest in the honey bee?  Recently, I came across a paper in the

Proceedings of the National Academy of Sciences entitled, Recombination is associated with the evolution of genome structure and worker behavior in honey bees.  In it, the word “evolution” or a derivative like “evolve” or “evolutionary” was used ninety-three times.  Yet, not a single use was associated with a working definition for this particular paper.  Why would professional scientists write a paper that is included in a prestigious journal like the PNAS and use a word like evolution so profusely, but fail to outline it’s meaning or their idea of what its working definition is and why it is relevant to this particular study?  In the first paragraph of the abstract, confusion sets in when it comes to what the idea of what evolution is by stating that within societal insects like honey bees, “worker behavior(s) evolve more quickly.”

What is evolution?  I wrote a book about this question because of papers like this.  Not only does our public educational framework use evolution and require its teaching without defining it, our National Academy of Sciences publishes papers focused on the topic of which they too do not offer a working definition.  When I read something, anything and a word is used over and over again, I look up that word to make sure I understand what it means.  Yet, there is no concise and scientifically agreed upon definition for evolution.  Why is that?  Perhaps this paper was written with an ambiguous outlook of evolution because its writers want us to cross examine their use of the word with empirical data.

I like empirical data, because its so observable, testable, repeatable, and verifiable.  It is so much better than ambiguous ideas that are based in assumptions and philosophy.  So, let us take this paper to the all encompassing light of real data.

In this paper, there is a claim that societal insects evolve rapidly when it comes to their behavior.  Since we have no idea what evolution is, now we have to start assuming.  Is it change over time?  Is it what Darwin was looking for, “the origin of species?”  In order to move on, let’s define evolution in the broadest possible way and call it “change over time.”  Obviously, this encompasses many non-biological processes like erosion and oceanic salinity, but for the sake of moving on let’s go with “change over time.”

What is worker bee behavior?  Building a hive?  Tending to the larvae?  Producing wax?  Foraging for nectar?  Producing and storing honey?  Building honeycomb?  Protecting the colony?  Moving the colony to a different location?  Could these all be associated with worker behavior?  Have these behaviors changed over time?  Have these behaviors changed quickly over time?

Humans have been keeping bees for a very long time.  Some anthropologists would agree that our relationship with honey bees precedes our relationship to cultivating the soil.  Has the behavior of worker bees changed since then?

Paleontologists have estimated that bees emerged 60 to 130 million years ago.  Bees and their honeycombs are represented in the fossil record, which documents behavior… right?  Fossilized honeycomb is an ancient chunk of behavior data.  We can see that honey bees made honey comb millions of years ago, now we can test the idea of rapid evolution.  How does the behavior of bees today compare to the behavior of bees in the distant past? 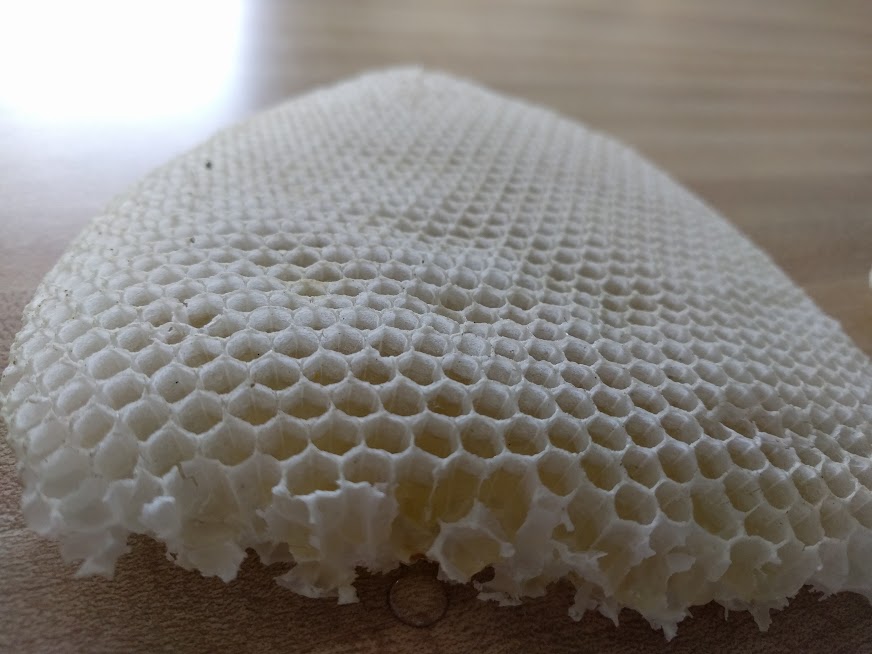