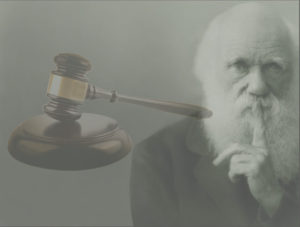 When it comes real data that can be collected today, the idea that evolution produces new and unique species cannot be observed, tested, replicated, nor verified.  So, we must ask ourselves; is evolution legal?

In fact, experts in the field of evolutionary biology agree:

Edward O. Wilson described each species as being “a masterpiece of evolution that humanity could not possibly duplicate even if we somehow accomplish the creation of new organisms by genetic engineering.”

Jerry A. Coyne suggested a “better title for The Origin of Species… would have been The Origin of Adaptations: while Darwin did figure out how and why a single species changes over time (largely by natural selection), he never explained how one species splits in two.”

Richard Dawkins boldly stated that he will “show the irrefragable power of the inference that evolution is a fact,” yet quickly backpedaled by saying that, “Obviously, the vast majority of evolutionary change is invisible to direct eye-witness observation.”

These evolutionists are not unique in their understanding of Darwin’s hypothesis. It is quite clear that the idea of evolution is based upon inferences that cannot be observed, tested, replicated, nor verified. No one has ever been able to produce empirical data that scientifically validates the emergence of species by means of natural selection.

In fact, the National Science Teachers Association has clearly communicated there is debate “about how evolution has taken place,” and has asked the question of, “What are the processes and mechanisms producing change?”

The 1981 court case Segraves versus the State of California concluded that scientific explanations must pertain to the “how” and do not pertain to an “ultimate cause.”

In the 2005 Supreme Court case Kitzmiller versus the Dover area school district, Robert T. Pennock stated that as a science-focused community we must “seek explanations in the world around us based upon what we can observe, test, replicate, and verify.” Ultimately, this case showed Intelligent Design to be unfit for the public classroom on the basis of it not being able to be scientifically observed, tested, replicated, nor verified.

According to legal precedent, evolution is unfit for the public classroom due to the fact that biologist cannot explain the “how” of evolution. It is also unfit because the main result of evolution is unable to be observed, tested, replicated, and verified.

Those who find themselves as subscribers of evolutionary thought believe the emergence of new species by means of natural selection to be true even though it cannot be observed. They believe that somehow, and given millions of years, new species emerged. Yet, if the core aspect of evolution cannot be observed and is included in the required curriculum, our civil liberties are being infringed upon.

Webster defines supernatural as being part “of or relating to an order of existence beyond the visible observable universe.” If science cannot observe it, test it, replicate it, nor verify it… than it is outside of the natural world and therefore supernatural. Why are supernatural explanations being taught as fact in public classrooms?

The belief that new species emerge by means of natural selection can only come through the supernatural and unobservable power of millions of years. Evolutionist, Richard Dawkins, has stated that we “need to define religion as belief in something supernatural.” So then, why is the religion of evolution being taught in our public classrooms?

On December 15, 1791 the Establishment Clause was added as part of the first Amendment to the United States Constitution which clearly states “Congress shall make no law respecting an establishment of religion, or prohibiting the free exercise thereof.” If teaching evolution promotes faith in the supernatural phenomenon of the emergence of new species, it cannot be legally included in the US public school required curriculum.

A third reason why evolution is illegal has to do with the scientific journal titled, Evolution. It is funded by tax dollars through the National Research Council and the National Academy of Sciences. The journal has stated that the “prevalence of religious belief in the United States suggests that outreach by scientists alone will not have a huge effect in increasing the acceptance of evolution, nor will the strategy of trying to convince the faithful that evolution is compatible with their religion…. another strategy to promote evolution involves loosening the grip of faith on America.”

If educators in the field of evolutionary biology are keen on “loosening the grip of faith on America,” they have the right to do so, but not with public funds. Evolution is undergirded by a clear and honest agenda of the eradication of evolution-opposing faiths. Its publicly funded and required evolutionary curriculum is unconstitutional. The governmental backing of biological evolution is a crime. Until the day comes when evolution’s goal shifts from getting people to reject evolution-opposing faith, can show evolution to be true without having to believe in the unobservable and supernatural power of millions of years, and can scientifically show the emergence of new species by means of natural selection… then we must stop using public funds to support evolutionary education.

Someday the scientific minds of this world will be released from the chains of evolutionary pseudoscience and be able to embrace actual science, technological progress, innovation, and breakthrough. The science class of the future will ask successive generations to focus on the reality of issues facing mankind. Science educators will ask their students how to address hunger, gridlock, energy sustainability, waste, medicine, water scarcity, and terrorism… just to name a few. Students will learn how to quench thirst with clean abundant water, offer speedy and efficient transportation, and end the pangs of hunger with smarter ways to farm. Adopting an approach of teaching how science works is far greater than teaching how to infer conclusions from a bias view of that which cannot be observed, tested, replicated, and verified.

If the youth of today are taught to face problems and are asked to address such issues in the light of scientific progress and innovation, our nation will be in a position of continued and sustainable breakthrough… bringing wealth and prosperity for generations to come.

Let’s make science the focus of our nation’s science classrooms!