What “DOGS” are in this FIGHT?

Before we dive into the data, let’s chat about the issue at hand.  The way I see the conversation surrounding vaccinations, we have two parties:

1. Concerned people who want the best for their children, for themselves, and for global society.

From my experience, I have met well meaning folks in all three camps.  Wait, why do I say three camps when I only listed two in the above list?

Category #1 is comprised of folks who disagree on vaccinations.  Essentially, the concerned people who want the best for their children, for themselves, and for global society are divided on how the role of vaccinations unfold in the reality of science and empirical data.

The real fight is between truth and the multi-billion, soon to be trillion dollar vaccine market.

Are “the concerned” being correctly informed or being fooled by a well oiled and well funded marketing machine?

Why does the United States have the highest vaccine schedule and the highest infant mortality rate (IMR)?

The following quote is from a study that compares infant mortality rates with infant vaccine schedules among 34 developed nations.

“The US childhood immunization schedule requires 26 vaccine doses for infants aged less than 1 year, the most in the world, yet 33 nations have better IMRs. Using linear regression, the immunization schedules of these 34 nations were examined and a correlation coefficient of 0.70 (p < 0.0001) was found between IMRs and the number of vaccine doses routinely given to infants. When nations were grouped into five different vaccine dose ranges (12–14, 15–17, 18–20, 21–23, and 24–26), 98.3% of the total variance in IMR was explained by the unweighted linear regression model. These findings demonstrate a counter-intuitive relationship: nations that require more vaccine doses tend to have higher infant mortality rates.

Efforts to reduce the relatively high US IMR have been elusive. Finding ways to lower preterm birth rates should be a high priority. However, preventing premature births is just a partial solution to reduce infant deaths. A closer inspection of correlations between vaccine doses, biochemical or synergistic toxicity, and IMRs, is essential. All nations—rich and poor, advanced and developing—have an obligation to determine whether their immunization schedules are achieving their desired goals.”
https://www.ncbi.nlm.nih.gov/pmc/articles/PMC3170075/

What is the Real Data Surrounding the Disneyland Outbreak?

What about Sanitation & Hygiene?

What about the Flu Shot?

What are the Vaccination Risks?

Does Vaccinating pose a Moral Issue?

“The WI-38 strain of human embryonic lung
cells is in short supply (13). This strain has been
in wide use for years as one of the standard cell
strains for viral isolation work (5) and more
recently for production of viral vaccines (2, 11,
12). In diagnostic virology this strain has been
relied upon for isolation of viruses belonging to
the herpes family (herpes simplex types 1 and 2,
cytomegalovirus [CMV], varicella-zoster [VZ]
[6]), numerous enteroviruses (4, 7), rhinoviruses
(3), and to a lesser extent other respiratory viruses (1). Other fibroblast cell strains are now
needed to replace WI-38. Several candidate
strains derived from human embryonic lung
have been well characterized, including MRC-5,
a strain derived from a 14-week-old male fetus
(8), and IMR-90, a strain obtained from a 16-
week-old female fetus (10). In the present study
WI-38, MRC-5, and IMR-90 cells were compared
for ability to recover viruses from clinical specimens, for speed of development of cytopathic
effect (CPE), for clarity of CPE morphology,
and for in vitro longevity.”

What are the negative implications of using aborted fetuses?

It has been shown that your DNA is drastically altered after someone else’s DNA enters your body.  For example, the popular DNA Ancestry site 23 and Me has stated the following:

“If you have received a bone marrow transplant using cells from a donor, we cannot support your use of the 23andMe® Personal Genetic Service.” (source)

A fascinating case is one of a bone marrow transplant case where an individual had acquired the alternate DNA of the bone marrow donor.

So, the question we must ask has to do with the potential genetic disorder the donor may or may not have.  Are they going to be acquired by the person receiving the treatment?

Using the fibroblasts of aborted fetuses is like playing Russian roulette.  What if that child was going to be born with mental challenges or any other abnormality?  What would be a good reason to have an unknown fetus’ lung cells injected into another human?

Interestingly enough, many parents have claimed to see a decline in mental capabilities in their child after having received vaccinations.  Could it be due to what the report clearly states in regard to the first fetus used to create MRC-5?

“The MRC-5 cell line was developed in September 1966 from lung tissue taken from a 14 week fetus aborted for psychiatric reason from a 27 year old physically healthy woman.” (source)

Would you consider yourself a good parent if you knowingly injected your child with lung cells from a fetus that was aborted for psychiatric reasons?

Would you consider your Pediatrician a good doctor if they knowingly injected your child with lung cells from a fetus that was aborted for psychiatric reasons?

Why is it ILLEGAL to sue a Vaccine producing company?

Why are vaccine producers allowed to have a monopoly on certain vaccines?

For example, MERCK is the exclusive manufacturer of the MMR vaccine and made 1.8 billion dollars in sales in 2018.

Does the World Health Organization see your children or profit margins?

Miloud Kaddar, Senior Adviser, Health Economist for the World Health Organization is very excited about the numbers.  Take a look at his presentation. 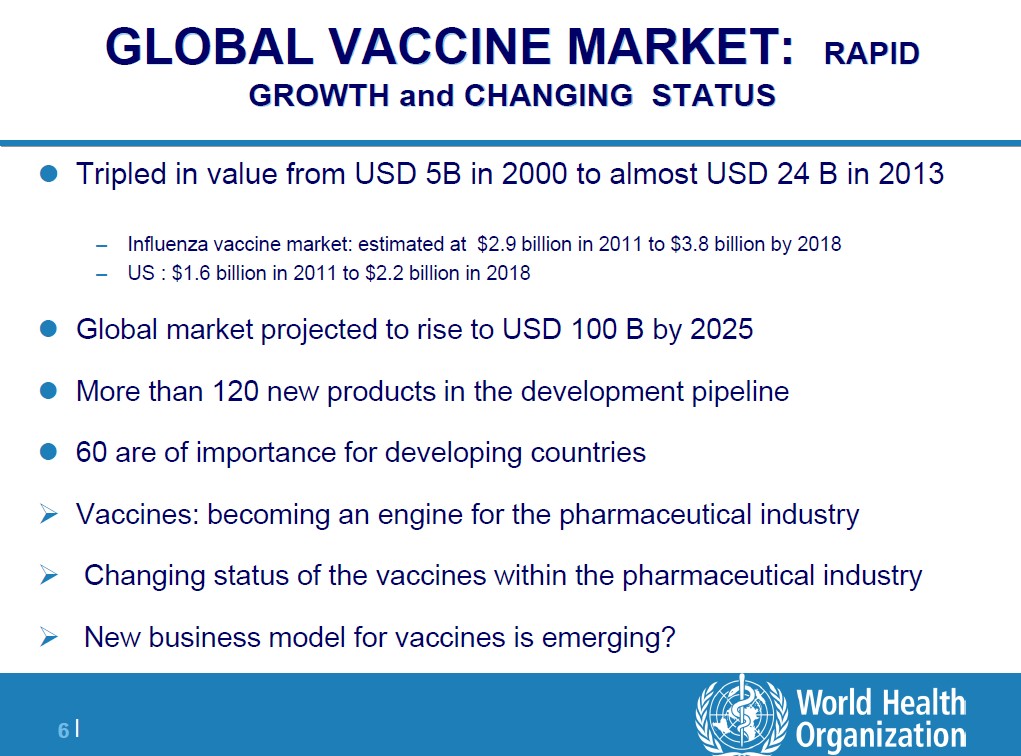 Have you seen the movie: VAXXED?