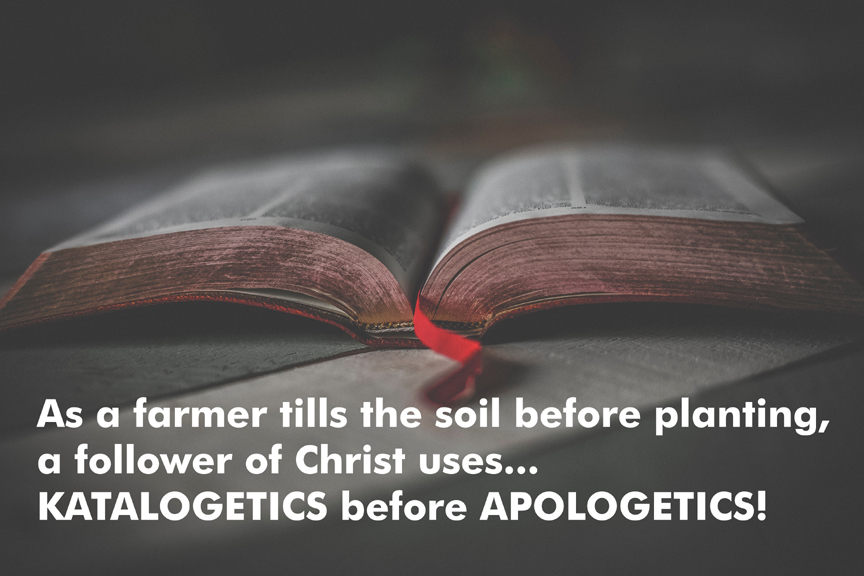 Matthew 7:8 – “For everyone who asks receives; the one who seeks finds; and to the one who knocks, the door will be opened.”

Jesus Christ claimed to be the ultimate, objective TRUTH and that HE can be found.  Yet, we live in a post-Christian society that has become overly confident in false pretenses.  Few people look beyond their own subjective opinions; failing to ask, seek, and knock. Pop-culture is bursting with ideas and philosophies that have blocked folks from the desire to ask for the reasons for which we have hope in Christ.

Church communities must adopt apologetics into the training and equipping of the saints.  The 1 Peter approach to “always being ready” is the best way to answer the questions being asked.  Biblical apologetics is focused on studying evidence that supports a reasonable faith in Jesus, but its effectiveness tends to be limited only to those who are sincerely asking for such reasons, and what if no one is asking?  What if people do not value scripture or the evidence supporting it? What if you are never being asked to share the reasons you have to hope for in Christ? In fact, what if you are being told to be quiet? Could this be happening because our society is so confident in ideas that are completely opposed to the knowledge of God?  Would apologetics become more effective if these roadblocks were removed and folks, once again, began to ask, seek, and knock?

2 Corinthians 10:5 – We demolish arguments and every pretension that sets itself up against the knowledge of God, and we take captive every thought to make it obedient to Christ.

identifies and tenderly dismantles confidence in false pretenses that oppose the knowledge and Truth of Jesus Christ.

As Christians, we must confront ideas that are in oblate contrast to KINGDOM TRUTHS.  In doing so, we create instability within the foundation of worldly ideas and false pretenses crumble, confidence wanes, and a vacuum of understanding forms.  The hearts and minds of those who had previously accepted Christ-opposing ideas are now seeking to fill the void. Tearing down subjective opinion and pop-culture philosophies causes people to ask, seek, and knock.  Once katalogetics has reasonably demolished a false pretense for someone, they are like tilled soil ready and waiting for apologetics to plant the seed.

Katalogetics is unique to Christianity  and is an approach that tenderly dismantles arguments and pretenses that stand against the knowledge of God.  A faithful katalogist is deeply concerned with gently dismantling arguments and pretenses that oppose the truth and knowledge of Jesus Christ, while doing so with the utmost level of gentleness and respect.

WHAT IS THE ETYMOLOGY OF KATALOGETICS?

2 Corinthians 10:5 – We demolish (kathaireō) arguments and every pretension that sets itself up against the knowledge of God, and we take captive every thought to make it obedient to Christ.

In 2 Corinthians 10:5, the word “demolish” is translated from the Greek word “kathaireō.”

– to take down, without the notion of violence: to detach from the cross, one crucified.

– with the use of force: to throw down, cast down – to pull down, demolish.

– the subtle reasonings (of opponents) likened to a fortress, i.e. to refute, to destroy.

“Kathaireō” is a compound word/phrase that is comprised of the Greeks words “kata” and “haireō.”

– according to, toward, along.

– to take for oneself, to prefer, choose

– to choose by vote, elect to office.

Although “kathaireō” is a word that communicates destruction, we must remember to take heed to 1 Peter 3:15 and carry out katalogetics with gentleness and respect.  Our goal is to lead folks to Jesus and we must remember that building relationships through love furthers the future effectiveness of apologetics. Interestingly, the word “kathaireō” was used to describe the gentleness and respect Joseph of Arimathea took in taking down the crucified body of Christ.

Mark 15:46 – So Joseph bought some linen cloth, took down (kathaireō) the body, wrapped it in the linen, and placed it in a tomb cut out of rock. Then he rolled a stone against the entrance of the tomb.

As a farmer tills the soil before planting, a follower of Christ uses KATALOGETICS before APOLOGETICS!

HOW DO WE KNOW WHAT IS AGAINST THE KNOWLEDGE OF GOD?  >>>click here<<<