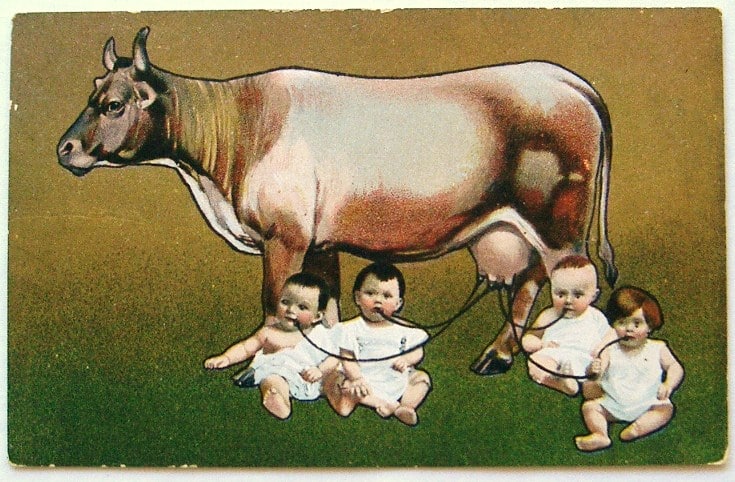 Yesterday morning over breakfast, I asked my ten year old daughter a hypothetical question.  I asked if a baby cow was raised by pigs, would it oink or moo?  She looked at me like I was stupid and firmly said, “MOO!”  I responded with a thank you and another question of performing plastic surgery on a Golden Retriever.  Again, my question was a hypothetical situation where a Golden Retriever gets it’s hair died black and shaved short like a Doberman Pinscher.  The dog’s ears and tail are also trimmed to mimic the appearance of a Doberman Pinscher, for all practical purposes this Golden Retriever now looks like a completely different breed.  Since it looks like a Doberman Pinscher, it is right?  Her jaw dropped and looked at me like I was her annoying little brother, of which she doesn’t have one.  “Dad,” she said, “are you serious?  Do really think the dog is different now?  It would still have Golden Retriever babies.”

Why was I pestering my ten year old daughter with these questions?  I wanted to put to test something I read in an article recently entitled: This is why evolution is poorly understood by our students — and even our science teachers by Nathalia Gjersoe of The Guardian.  In it she speaks of a psychological study performed on pre-schoolers age 2 – 4 years old.  The study was designed to test certain biases that all humans are born with.  These biases are entrenched into our way of thinking regardless of what our family of origin thinks of the topic and the article talks about two of them.
Psychological essentialism is the first bias the article talks about and it has to do with the idea that species are internally maintained and unable to change.  The idea of an unchangeable essence or attribute that is deep in the core of a species goes against Darwin’s theory of evolution by natural selection.  For this reason the study was created.  You see, proponents of evolutionary education are frustrated and desire to teach minds that are free of opposition to their curriculum.  Perhaps this reality could be giving us a hint as to what part of a scientifically agreed upon definition of evolution could be.  If the idea of unchanging species goes against the idea of evolution, then could it be safe to say that changing species is complimentary?  What is evolution?  Well, according to this study, part of it has to do with the emergence of new species.  I go into great detail in regard to this idea in my book, What Is Evolution?
The second bias covered in the previously mentioned article is called promiscuous teleology and it means that all things have purpose and are designed for something.  Teleology is the act of deriving explanations of how things work based on function as opposed to what caused their existence.  For example, explaining that shoes are for wearing on your feet is chosen more frequently than describing that shoes are made by people operating machines in a factory.  Our human bias that favors the idea all things existing for a purpose also goes against Darwin’s theory of evolution by natural selection.  “Purpose” suggests an entity and/or phenomena that goes beyond nature and dips into the supernatural realm.  Purpose is not able to be scientifically observed, tested, replicated, and verified; of which makes science educators keen on getting rid of such a bias.
Yet, I have a question?  Could an experiment be set up that scientifically tests the whole breadth of this article?  Sure, I verified the scientific claims of our human bias with my daughter, but I mean the other stuff… the motives.  Are species changeable or unchangeable?  Is everything in the Universe full of purpose or not?
I’m not going to touch the idea of testing “purpose,” but what about species?  What if we did convince pigs to raise a cow, or two, or three?  Scientifically speaking, was my daughter wrong?  Would a cow grow up to moo or oink?  This is something that could be tested and we could observe, repeat, and verify the result.  Is the opposite true?  What tests could be set up to show that species do change into new species?  Could this idea be scientifically observed, repeated, and verified?  Why do proponents of evolution want to get rid of a bias that can be scientifically tested and replace it with something that seems unable to be scientifically tested?